biologist, was born in Coventry on 21 October 1930, the eldest of three children of Francis Oscar Tickell and Amy Louise, née Noyes.

After a nomadic childhood, he attended Lawrence Sheriff School, Rugby and was conscripted for national service in the army. On release in 1950, he attended Coventry Technical College and went on to the University College of North Wales at Bangor graduating in botany and zoology. 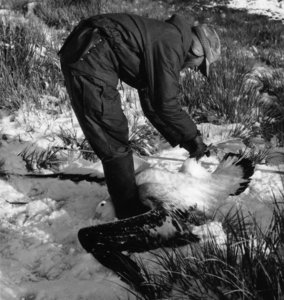 In August 1954 he joined the Falkland Islands Dependencies Survey (FIDS), attending the Air Ministry Meteorological School at Stanmore, Middlesex and sailing in the old RRS John Biscoe. He spent November in Stanley before being posted to Signy Island in the South Orkneys. He helped build the second Base H (Tönsberg House) and began field studies of the resident petrels.

The next year Tickell became base leader, taking part in the survey of Coronation Island with Drummond Matthews and Douglas Bridger. On 11 September 1956, with Alan Grant, he made the first ascent of Mount Nivea (4,154 feet), the highest peak in the group. 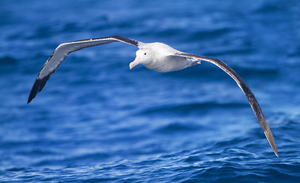 A Wandering Albatross in the Tasman...

On return to the United Kingdom in the summer of 1957, he remained with FIDS, writing Scientific Report No 33 on the Dove Prion Pachyptila desolata under the supervision of Dr David Lack, director of the Edward Grey Institute of Field Ornithology, University of Oxford. In 1959 he was awarded an MSc (Wales) for this work.

Encouraged by Nigel BONNER, but with minimal funds, Tickell and Peter Cordall (ex-FIDS) put together the South Georgia Biological Expedition 1958-1959, and sailed in the Christian Salvesen whaling tanker Southern Opal. After camping for six weeks in Elsehul, they went to Bird Island with Bonner, helped erect the small shed that later became known as 'Bonner's Bothy' and assisted in tagging 1,700 fur seal pups. After Bonner returned to King Edward Point they remained on the island for 15 weeks, setting up field-studies of albatrosses and surveying the island. Cordall's map (1:12,500) was an essential contribution and remained in use by later scientists for over 40 years. 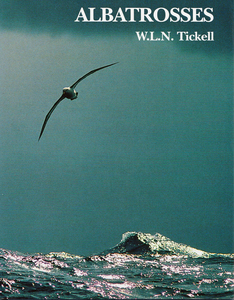 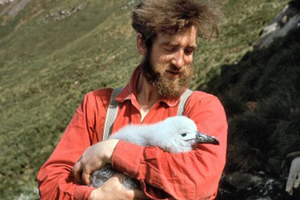 Lance Tickell on Bird Island with a...

While putting together that last expedition in London in 1962, Tickell had married Willow Anne Phelps. When he came home in 1964 they went back to Baltimore and Johns Hopkins University where he wrote a dissertation on the great albatrosses for an ScD (1966). Other papers followed, culminating in 2000 when Albatrosses was published by Christopher Helm. Tickell's memoirs of the decade 1954-64, Signy to South Georgia await publication.

In 1966 Tickell joined the (Scottish) Nature Conservancy as warden naturalist for Shetland and Orkney until 1969 when he went to East Africa as lecturer in zoology at Makerere University, Kampala. 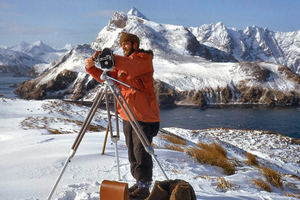 See:  Obituary of Lance Tickell in The Ibis