general manager FIC, was the eldest son of Thomas Havers, from a prominent Catholic family of Thelton Hall, Norfolk and Dorothy, née Charlton. Like all his brothers, Thomas was educated at Stonyhurst in Lancashire. One brother, John (FRCS), fathered a prolific Anglican family while another, William Joseph, died unmarried in Río de Janeiro in 1847. Brothers Robert (d 1860) Charles (d 1866) and Arthur became Jesuit priests. 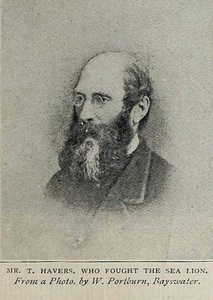 Thomas Havers married Ellen, daughter of the Rev Rogers Ruding, a numismatist, at the parish church of St Marylebone, London on 1 February 1844. He worked for the London firm of Ricketts, Boutcher & Co and was 'confidential clerk' to William Boutcher, one of the first directors of the Falkland Islands Company. By 1851, Havers was acting secretary of the FIC and three years later was appointed colonial manager. Havers embarked for the Falklands but was shipwrecked off the Welsh coast and had to set off once more, this time by Royal Mail steamer from Southampton. (The FIC board in February 1854 contributed £5 to replace the clothing of his governess and his servant lost in the wreck). The cost of the voyage for the Havers family was put at £200 for he travelled with his wife and four children as well as two servants. On his way to the Falklands, Havers stayed with SF LAFONE at Montevideo and visited saladeros (slaughter and salting yards). His misgivings were expressed to the board:

I cannot trust myself to state without more reflection my feelings on finding the veil gradually dropping as I approach from so miserable a picture that at a distance presented such splendid colours. Mr Lafone describes Stanley as nothing, all to be begun; the Camp Manager speaks of a worthless country without stock and all just in time it would seem to save me the pain of reporting the naked facts - I am sure your H[onourable] Board will excuse these expressions which may be hasty when you reflect that I have just received the news of all leaving as it were an empty house, to which at immense risk I have brought a delicate wife some thousands of miles. 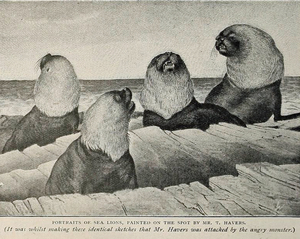 He arrived in the Islands in the brigantine Amelia on 9 May 1854 and lived with 'a family of eight in two smoky rooms, three in a bed and some on the floor' as his predecessor John Pownall DALE would not vacate the FIC's property, Malvina Cottage. Scarcely four months after arriving in Stanley, Havers' delicate wife Ellen died.

A little over a year later, on 16 October 1855 he married the governess Mary Clare Coppinger in the barracks at Anson (Port Louis), Berkeley Sound with the colonial chaplain the Rev Henry Martyn FAULKNER officiating. She was a member of a well-known East Cork family involved in the corn and malt trade with three residences in Midleton. There were four sons from this union, George (born on the day of the marriage), Robert Falkland (b1857), Kenneth Joseph (b1859) and Alfred (b1860). There was a flurry of official correspondence in December 1855 over the registration and exact sequence of the marriage and George's birth. 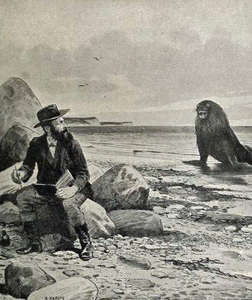 Despite being married according to the rites and ceremonies of the established church in London 1844 and by the Church of England colonial chaplain eleven years later, Havers was very committed to his faith and organised the Catholics in Stanley to attend a prayer service on Sundays followed by catechism classes for children. He wrote widely to try to obtain the services of a resident priest, with letters to Cardinal Wiseman in London, Cardinal Barnabó in Rome and Archbishop Cullen in Dublin. Fr Lawrence KIRWAN came from Buenos Aires in 1857 and stayed for six months and together with Havers helped set up The Catholic Fund to obtain a plot of land and to build a chapel or church. In some respects, Havers was ecumenical in his actions long before it became customary, advising Governor MOORE on 6 November 1856 that he 'presents the new Church the five octave organ lately belonging to Captain SNOW which I do on behalf of the Court of Directors [of the FIC]...' Five days later he advised that a cover had been ordered for the new organ and he awaited the Governor's command to deliver it to the Church, in the meantime 'it is in a well aired room at my house'. Finally on 3 June 1857 he advised Governor Moore that the organ was presented to the Protestant Church in the name of the directors of FIC.

If Havers wrote prolifically in his efforts to obtain a resident Catholic priest, then his correspondence with FIC in London was yet more voluminous. But all was not well. The FIC AGM of August 1858 noted that 'the directors regret that they are compelled to terminate the Company's engagement with Mr Havers, as soon as arrangements can be made for his being relieved...' That was to take some time and the local accounts were in such disorder that the August 1860 AGM mentions 'Mr Havers' culpable disregard of the Board's instructions and from his having kept his accounts in such negligent confusion... that the whole of the Island Accounts have in consequence been sent to England'. Fraud was never attributed to Havers who was replaced as colonial manager by James LANE, a solicitor in the firm of Rhodes, Lane & Rhodes. Lane arrived in Stanley, displaced Havers and turned him, wife and children out of the manager's house, stopped his salary and effectively left him destitute. Unable to pay his passage home Havers started painting portraits and working as a labourer. By letter of 17 March 1860, Havers advised Anthony Fahy OP of the massacre of members of the Patagonian Missionary Society:

As I had painted portraits of six of the last lot of natives including two of the principal murderers, I was desirous of adding Jemmy [Button] to my collection & accordingly had him two days at my house. He had heard much of me before & so was on easy terms and very communicative on all matters except the massacre to which he never alluded in the slightest degree.

There is a further interesting reference to his painting in a letter of 12 November 1860 to the secretary of state (the Duke of Newcastle) when Governor Moore notes that 'a very careful set of correct drawings in colour from nature of the chief animals of the Colony is now in course of preparation by Thomas Havers Esq. of Stanley, with a view to publication hereafter'. The whereabouts of all his paintings is unknown.

Within FIC, Havers' appointment as colonial manager had been a cause of some disagreement and at the FIC extraordinary general meeting of August 1861, William Boutcher remarked that another director 'had said to me that he never much liked the appointment of Mr Havers because he was a Roman Catholic & a Jesuit'. Some time during 1861 Havers and family moved to Montevideo. He founded The Montevideo Times newspaper which appeared from 1864 to 1865 - a venture which proved unsuccessful - and then became director of public works. There are indications that he had a working relationship with the British consul in Montevideo. Havers remained in Uruguay (possibly living off the money he had received from the sale of Thelton) where he died in 1870, and his surviving children returned to England. Thomas Havers wrote his will in 1864 appointing his brother Arthur and his solicitors his executors, with provisions for his wife Mary Clare and his younger children, provision having been made already for his eldest son Thomas.

His son Kenneth Joseph Havers (FRGS) an artist was active in Catholic circles in London, while his daughters Alice Mary HAVERS and Dorothy Henrietta HAVERS became well-known as an artist and as a writer respectively.

Thomas Havers was a talented but complex individual. Robert W Havers of Consett, Co Durham writing in 1992 summed him up: 'Thomas is generally regarded as being the black sheep of the Havers family (and therefore more interesting than most)'. For the Havers family, he is accused of being the brother who through inept managership caused the family home and lands to be put into receivership and sold to the Mann brewing family - the present owners.