genre and landscape painter, was born at Thelton Hall, Norfolk, the third daughter of Thomas HAVERS and his wife Ellen, daughter of the Rev Rogers Ruding , a numismatist and Fellow of the Society of Antiquaries. 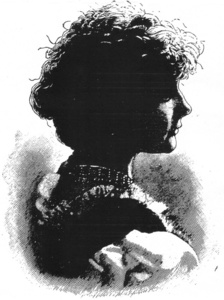 179 Last portrait, from the Illustrated...

In 1854 the family moved abroad and Thelton Hall was sold.

Thomas Havers became manager of the Falkland Islands Company in Stanley from 1854 to 1861 and honorary consul for Hamburg. He subsequently worked in Montevideo, Uruguay where he started the Montevideo Times and became director of public works. Little is known of Alice Havers' childhood in Stanley and Montevideo. The death of her mother in Stanley must have been a serious loss. Her religious upbringing was presumably Catholic as her father is known to have held Catholic services and given religious instruction in   Stanley; he appealed to Cardinal Wiseman, Archbishop of Westminster, for a priest to be sent to the Falklands. It is also probable that her father - who planned a series of paintings of Falklands fauna - encouraged her interest in art.

After the death of Thomas Havers in 1870, the family returned to England and Alice Havers was granted a free studentship at the South Kensington art schools in London.

On 13 April 1872 she married the artist Frederick Morgan (1847/8-1927) with whom she later had two children, Lilian and Reginald - and in the same year began exhibiting her work. Only one known painting, A Montevidean Carnival (exhibited at the Royal Academy in 1874) refers directly to her childhood experience. However the latter may well have informed her interest in themes connected with rural life and work and perhaps contributed also towards her strong social conscience. This is manifest in ambitious paintings such as 'Tis a very good world we live in (1874), which contrasts the lot of rich and poor, The end of her journey (exhibited Royal Academy 1877; Rochdale Art Gallery), Trouble (exhibited Royal Academy 1882) and The Rights of the Poor (exhibited Institute of Painters in Oil Colours 1883/4). 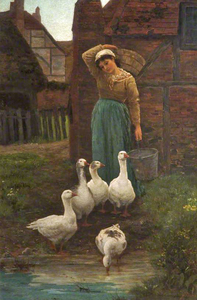 A painting by Alice Havers ...

Havers was a popular artist, partly as a result of early recognition by Queen Victoria who bought 'Ought and carry one' (Royal Academy 1874), a painting which was subsequently engraved. A Montevidean Carnival was commissioned by the collector Henry Blackburn. 'But Mary kept all these things and pondered them in her heart' (Castle Museum, Norwich) received an honourable mention at the Paris Salon in 1889. Her paintings were priced up to £250.

Havers was also an illustrator - of stories by her sister, Theodora/Dorothy HAVERS (1847-1923), who published under the pseudonym Theo Gift, and of collections of poetry.

In 1888 - by which time she had separated from her husband - Havers studied under the artist Filippo Colarossi in Paris.

Alice Havers took her own life on 26 August 1890 at 11 Marlborough Road, London.