superintendent of education, was born in London on 7 February1913, elder son of Harry Cawkell and Ethel, née Bullock. His father died during World War I and both brothers were brought up by their mother. He was educated at Hastings Grammar School and after school trained as a teacher in Winchester and began his working life in London. World War II then intervened. Cawkell joined the army and was posted to the Middle East. While working at General Spears' mission in Syria he met his wife Mary Waddell (Mary CAWKELL) and they were married in Lebanon in October 1942. After the mission was disbanded he took over the Middle East Biological Scheme organising expeditions for army personnel and sending back valuable specimens to the British Museum. He had risen rapidly from second lieutenant to acting lieutenant-colonel. 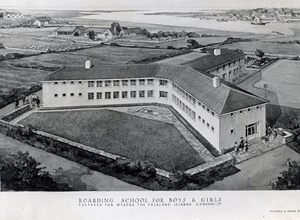 Back in England he became headmaster at Mere in Wiltshire and Swanage in Dorset, before sailing for the Falkland Islands and a Colonial Service post as the colony's education officer. The appointment was confirmed in August 1950. It was an appointment that he had particularly wanted, both for the challenge of the job, and also because of his lifelong interest in ornithology.

During his six years there he brought about radical changes and contributed tremendously to the development of education in the Falklands by his vigour and energy. Teaching staff were strengthened. He oversaw the building of a boarding school in Darwin which was funded by the Falkland Islands Company to celebrate their centenary in 1951. At that time, the early 1950s, education was compulsory between the ages of 5 and 14 with voluntary classes enabling study to be continued to the age of sixteen. Cawkell arranged for scholarship children to go to England to complete their education. He was also responsible for the opening of Stanley's infant school in 1956. A keen horseman, he visited all areas of the islands overseeing the three travelling teachers who, together with radio lessons, provided the education for Camp children. Travelling on horseback also enabled him to make observations on the bird life of the Islands, which resulted in an authoritative checklist.

In 1950 he was appointed by Governor CLIFFORD to LegCo and in 1951 he was also appointed a member of ExCo. In April 1955 he was appointed director of broadcasting in the Falklands and chairman of the Broadcasting Advisory Committee. So in addition to running the schools, having a full teaching load, being involved with the new schools being built in Stanley and Darwin and work connected with the Central Film Library, organising visits of visiting scientists, he took on being responsible for broadcasting. At home the garden was always full of penguins, generally en route for zoos in other parts of the world.

He left the Falklands after being appointed to the Gambia as the director of education. When that colony gained independence he returned to the UK and joined the Royal Society for the Prevention of Accidents (RoSPA) as director of safety education. By then he had married his second wife Rosemary Joy Bartlett. They retired to Rye in East Sussex and became involved in local and church affairs. Joy Cawkell died in 1985, and Edwin Cawkell on 24 September 1997.