pilot, was born in Stanley on 28 November 1933, the youngest child of Thomas Watson Campbell and Marion Anne, née Binnie.

His childhood was a contented one - he attended the Government School and received good grades in all subjects. He was 13 when his father died and the loss had a huge impact on him.

At the age of 16 he was apprenticed to the FIC as a carpenter under the guidance of Percy Dixon.

He joined the Boys' Brigade in his early teens and wholeheartedly enjoyed all the Brigade offered, especially the physical training, becoming expert in parallel bar work. At 19 he was promoted lieutenant and relished the responsibilities which that involved. 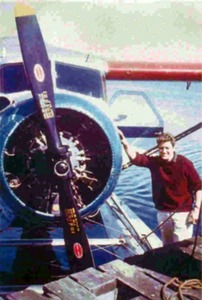 The turning point in Campbell's life came towards the end of 1954 when he was accepted for the position of student pilot with FIG. His five-year carpentry apprenticeship was due to finish in November 1954, so the timing was perfect and he joined FIGAS on 1 January 1955.

John HUCKLE and Jim KERR became influential in Campbell's life, tutoring him in the theory of flying. A small Auster seaplane which was no longer used for passenger carrying was used for practical tuition. 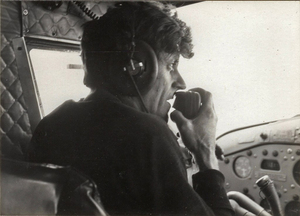 Cam - a hero to his people

After 12 hours of flying his private licence was issued and he continued to study and fly in preparation for moving to England to finalise his commercial licence.

He married local girl Nadine Evans on 12 July 1956 and they left the Islands two days later for training which started in Hamble (Hants) in September.

He earned his commercial pilots' licence in February 1957 after completing his cross-country out of Stansted airport. The couple returned to the Islands in April 1957.

After a conversion from landplane to Beaver seaplane, Campbell settled in to flying in the Islands for FIGAS; over the years he flew 11,000 hours and never lost his enthusiasm for doing the job he loved.

In 1973 he was awarded the MBE, which almost everyone in the Islands celebrated.

In the 1960s Campbell purchased the MV Redwing from Port San Carlos and in his off-duty time spent many happy hours relaxing on the small cutter. At weekends he would often make trips up Berkeley Sound and annually he and a friend visited various parts of the Islands, including one memorable trip to the Jason Islands from West Point in the summer of 1973. 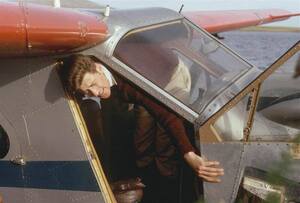 Cam clambering out of the Beaver...

Ian and Nadine Campbell went on overseas leave in June 1976, returning in September.

Five weeks later on 14 October 1976, Campbell's Beaver seaplane was reported overdue on a flight from Brenton Loch to Stanley. A search was mounted and the only passenger on the flight was located on a small island in Mare Harbour within 24 hours. Some 19 days later, Campbell's body was recovered from the sea in the same area, thanks to the tenacity of a group of local divers.

Ian Campbell's funeral was held on 5 November at Christ Church Cathedral, Stanley, where he had been baptised, confirmed and married.

The circumstances of the crash were never satisfactorily explained and aroused deep public concern, which was aggravated by Governor FRENCH's maladroit handling of the enquiry.

The British Accident Investigation Branch sent two inspectors down to investigate the accident. Their report noted Campbell's flying experience and concluded: 'The accident was caused when the passenger, who was flying the aircraft, lost control during a landing manoeuvre which caused the aircraft to stall, capsize and sink'. 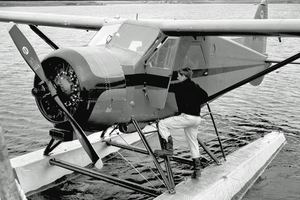 Cam - climbing into the Beaver...

Campbell was a charismatic Islander who loved his homeland and its people and with his infectious charm endeared himself to all who knew him.

In a despatch to London, the succeeding Governor, James PARKER, described him as 'the only Islander pilot in the internal air service, a hero to his people'.

The FIG honoured his memory by naming a street in Stanley after him, and there is a memorial plaque in the Cathedral.

I was fortunate enough to be a passenger on a number of Ian's flights and always found him to be a charming man with a natural and ready smile for all.
He inspired me to persue a career in aviation, which turned out to be a most wonderful experience, from which I have just retired.
Thank you Ian for encouraging me to follow my dream.
You were a local hero who blazed the trail for many more Islanders to become FIGAS pilots and I'm very privileged to have been one of them (1984 to 1989).
Thank you Nadine for this interesting information.
Kind Regards.
Ian McPhee