He was educated at Marfield Grange in Kent and then at the Royal Naval Colleges in Osborne and Dartmouth. He joined the Navy in 1910 and served as midshipman in HMS Cumberland and HMS Challenger in the Cameroon Campaign 1914-1915. 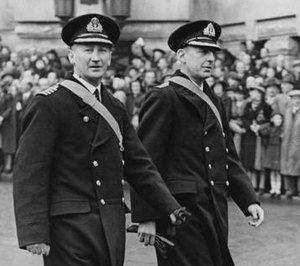 Bell served in HMS Canada in the Grand Fleet at Jutland and then between 1916 and 1923 he specialised in submarines. From 1930 to 1932 he was loaned to the Royal Australian Navy and was promoted commander in 1931.

In Melbourne he married Dulcie, the daughter of an architect, Nahum Barnet. In 1933 he qualified for the Staff College and two years later he was appointed commander of the Repulse.

Bell was promoted captain in 1938 just before the outbreak of World War II and in 1939 was given command of the 8-inch gun cruiser HMS Exeter, in which he took part in the Battle of the River Plate in December 1939, between ships of the Royal Navy's South American Division and the powerful German pocket-battleship Graf Spee (Captain Langsdorff) . 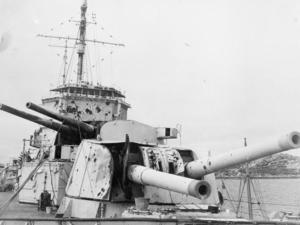 484 Action damage to HMS Exeter during...

On 2 December 1939, the Exeter and the light cruiser Ajax, Captain Woodhouse, flying the broad pennant of Commodore HARWOOD, were at anchor in Port Stanley. On hearing intelligence that the Graf Spee was in the South Atlantic, and anticipating that she would probably target shipping near the River Plate, Harwood sailed to intercept her and to rendezvous with the light cruiser Achilles.

On 13 December, 24 hours after he had made his concentration, the Graf Spee was sighted. In the ensuing action, one of Graf Spee's first salvoes struck the Exeter's bridge, killing all but three of her officers. Bell was one of the survivors but was able to continue the action until the Exeter sustained further damage and was listing heavily. As she had only one turret still in action, 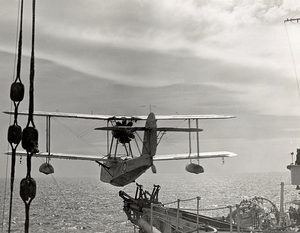 Harwood ordered Bell to return to Stanley to effect repairs. Ajax and Achilles continued the action until they too sustained significant damage and dropped out of range.

However Langsdorff, mindful of his 36 men killed and 59 wounded, decided to run to Montevideo for repairs. He was limited to 72 hours in port by neutral Uruguay (because of the requirements of Article 17of the Hague Convention of 1907) and believing that the aircraft carrier Ark Royal and the battle-cruiser Renown were waiting for him to emerge, decided to sail with a skeleton crew and scuttled his ship in the approaches to Montevideo on 17 December. Langsdorff committed suicide three days later.

The British ships returned to the Falklands arriving on the 16 December. The colonial secretary, CRAIGIE-HALKETT, had offered the whole resources of the town to the Exeter, which arrived with 45 wounded. Bell wrote to him that 'No words can express our relief this morning on at last reaching the sanctuary where we were so sure of our welcome'. 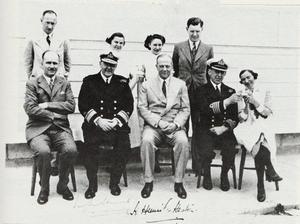 Staff of the King Edward Memorial...

The hospital was full of casualties and the Islanders looked after wounded in their own homes. Gifts of eggs, butter, meat and books were provided to the hospital. A funeral took place on 18 December for two of the casualties who had died in Stanley.

It is likely that some of the steel plate and other materials that was required to patch up HMS Exeter were obtained from the Grytviken whaling station on South Georgia, and that the whaling company sent one of their transport ships to Stanley specifically for this purpose. Compañia Argentina de Pesca's transport ship Harpon was despatched from Grytviken to Stanley on 5 January 1940, and she arrived in Stanley on 10 January 1940. The Harpon sailed on the same day for St. Vincent with a cargo of whale oil. There is little doubt that the ship made a huge diversion from South Georgia to Stanley seemingly in order to assist the Exeter, which sailed for Devonport supported by two heavy cruisers on 21 January 1940. 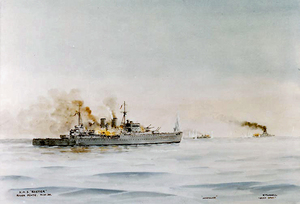 After the successful repair of his ship Captain Bell wrote to Governor HENNIKER HEATON on 18 January 1940:

'I would like to place on record our very deep appreciation for all the many kindnesses and acts of generosity that have been bestowed on us by yourself and the people of Stanley and the Falkland Islands. When we arrived here on December 16th battered and weary nothing was too much trouble for your people. Our sick and wounded were taken in and cared for, homes were thrown open to us, and everybody, forgetting self, went out of their way to aid and welcome us. These acts will not readily be forgotten and I can assure your Excellency that the officers and men of Exeter will long cherish their thoughts of the Falkland Islands and all the memories that go with them.

May I especially thank your Medical Staff and all their voluntary helpers for their expert skill and tireless attention that has at all times been paid to our wounded, with a special note of thanks for our friends from Buenos Aires who unselfishly gave up their jobs at a moment's notice to come to our assistance. I would also like to thank personally the many householders who so kindly sheltered and succoured those of our wounded who could not be accommodated in your hospital. To you Sir, personally may I tender my sincere thanks for your great and many kindnesses to me, not forgetting the part you played in fostering the good name of Her Majesty's Ship that I have the honour to command.' 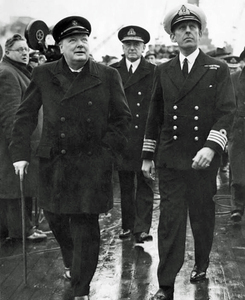 Bell was awarded the CB and after the war became ADC to King George VI, a post he held between 1947 and 1948 after which 'Hooky' (as he was known because of his distinctive Roman nose) retired.

(1)  From the Epsom and Ewell History Explorer:   'Details of Frederick’s subsequent career are hard to find, but we do know that he became Flag Captain to the Flag Officer Malaya and pulled off what was probably his greatest escape of all, from a fate which, literally, would have been worse than death – internment by the Japanese. There is an excellent article by the late Lt. Col. P.A.B. McKerron on The British Empire website, telling us about the fall of Singapore to the Japanese in February 1942 and how Frederick ‘borrowed’ a boat from the Singapore Yacht Club and sailed it to Sumatra.'

In January 1946 Frederick took command of the battleship HMS Anson and from 1947 he was ADC to King George V1; he retired on health grounds in January 1948.

(2) The 'friends from Buenos Aires' referred to by Captain Bell were a medical team from the Anglo-Argentine community which hurried to help the KEMH after the 1939 battle. 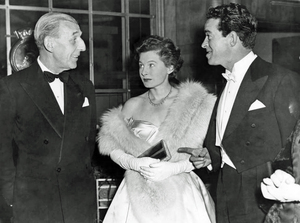 Captain Frederick Bell (left) of the...

Dr Pennington, a radiologist from Buenos Aires also accompanied the nurses on SS Lafonia. He was awarded the OBE by King George VI for his services to the injured.

One of the nurses later wrote: 'On Saturday night, off we went – down the River Plate, carrying with us a wonderful example of the British Patriotic Association’s generosity; Doctors, nurses, masseuses, 270 packages containing equipment for a 100-bed hospital, a complete new X Ray manned by an expert radiologist. It would be far easier to name the things we did not take than those we did.'

The Falkland Island's local newspaper FI News Weekly and Church Bulletin 2 February 1940 reported that the doctors and nurses departed from the Falklands in SS Lafonia on 26 January 1940.

(The information in this editorial comment came from Hugh Osborne)

(3)  Seaman Gunner Basil Trott (later Lieutenant), who was believed to be the last survivor of the Battle of River Plate, died on 12 July 2021, aged 101. In his obituary in the Daily Telegraph (dated 28 July 2021) there is a vivid eyewitness account of the sea battle: ' [After the battle was over] he was detailed to assist in the gruesome task of picking body parts from the wrecked turrets and sewing them up in weighted hammocks for burial at sea. He recalled "It was impossible to separate who was who and it was a matter of putting bits together and hoping that those you had sewn up into a hammock were all the same person." After the Mainbrace was spliced (a free tot of rum was given out) Trott turned in, slept well and was never troubled by bad dreams afterwards. Exeter made for the Falkland Islands where she was warmly welcomed. The ship's company was accommodated ashore while they repaired the ship, Trott staying with the family of a young woman whom he had met on previous visits ... When eventually Exeter reached Plymouth and the people greeted [the men] as heroes, Trott';s thoughts were "Why all this, what have we done? We fought a battle which we had trained to do and just felt we had done our duty." 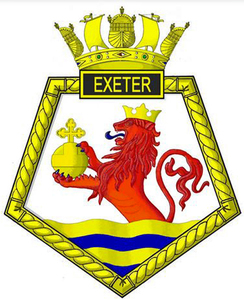 See: For a nearly complete list of the member's of HMS Exeter's ship company

See: Launching of seaplanes by catapult from Royal Naval cruisers

For an eyewitness account of the Battle of the River Plate by a member of the ship's company see: Captain A E Toase Royal Marine (BBC WW2 The People's War - an archive of memories of WW2 by members of the public). Aidan Toase was injured during the battle and was subsequently nursed at KEMH in Stanley after the battle. Toase was awarded the DSC and he later married the Falkland Islands-born Cora Newing.

Another eyewitness account (by Lt R Atwill DSM) of the battle by someone serving onboard HMS Exeter can be found at: Naval History Society of Australia

For an account of the activities of the Nurses and Doctors who travelled from the British Hospital in Buenos Aires to the Falklands to assist the staff at KEMH see: 'How I went to the Falklands - Angela Margaret Sadleir'