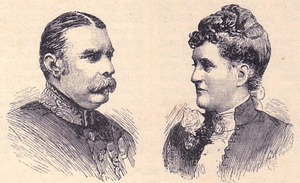 Barkly was educated at Harrow, and was a lieutenant in the 3rd Carabineers from 1862 to 1865. He served as private secretary to his father in Mauritius and Cape Colony, where in 1873, at Government House, Cape Town, he married Fanny Hatchard, daughter of the bishop of Mauritius. In August 1877 he was appointed a resident magistrate in Basutoland {Lesotho}. He took his wife and their two eldest children, Harry and Nancy, with him to Basutoland, where they remained during the Zulu revolt (1878-1879) and the Basuto rebellion (1880). Barkly's leadership and coolness under fire gained him the respect of the Basutos, who called him 'The Lion'. During each of the two major crises, a child was born to the Barklys: Hugh in January 1879 at the time of the massacre of British troops by the Zulus at Isandhlwana, and Gilbert (Bertie) on 20 June 1880 as the rebel Basutos were advancing on their residence at Mafeteng. Under hair-raising circumstances Fanny and the children got away, but Barkly was besieged in Mafeteng until relieved on 19 October 1880 by the Cape Mounted Police, who placed some of their troops under his command, thereafter called 'Barkly's horse'. He fell seriously ill in June 1881 and returned to Britain to convalesce. In November 1881 he was appointed chief civil commissioner of the Seychelles, where their fifth child, Dorothy Maud (Dot), was born in 1883. They remained throughout an epidemic of smallpox, and in autumn 1884 returned to Britain.

In January 1886, Barkly was appointed lieutenant-governor of the Falklands, as Governor KERR had requested sick leave. He travelled alone to the Falklands, arriving on board the Kosmos mail steamer Luxor on 12 February 1886, and took up his post on 4 March 1886, after Governor Kerr had left. His appointment as lieutenant-governor was temporary, on half pay of £500 a year, and he suffered constant financial hardship. During his tenure, another peat slip occurred in Stanley, following the first one of 29 November 1878. The second slip occurred on the night of 2 June 1886, and as Barkly reported in a letter to his father: 'a regular river of half-liquid peat flowed down the mountain, and ran across the very middle of the town into the sea. It has blocked up several streets, touched a house or two... and killed two people.' 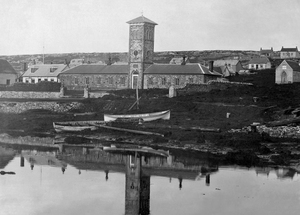 The second great peat slip of...

He thereupon initiated extensive drainage works to avoid a repetition of the disaster. He was popular in the Islands, and a special meeting of the Legislative Council on 9 December 1886 voted him an extra £100 a year. He left the Falklands in HMS Ruby on 17 December 1886 after Governor Kerr returned, and was unexpectedly sent back to the Seychelles. This time he took his whole family, and celebrated Queen Victoria's Golden Jubilee there on 21 June 1887, but was soon afterwards invalided home for the fourth time in his career (he had convalesced in Australia in 1863 after suffering a 'dangerous attack of congestion of the lungs', and in 1873 had been given a year's leave of absence from his post in Cape Town after an attack of rheumatic fever). He suffered from diabetes.

In November 1888 he was appointed governor of Heligoland, an island in the North Sea which had been British since it was captured from Denmark in 1807. Secret negotiations with Germany in the spring of 1890 by Lord Salisbury, British prime minister and foreign secretary, resulted in the Anglo-German Agreement of 1 July 1890, under which Britain exchanged Heligoland for large areas of German territory in Africa. The island was ceded to Germany on 9 August 1890, even though it had never been under German rule. Its Frisian-speaking inhabitants, who had been British citizens all their lives, were not consulted about the change, and Barkly himself only learnt of the agreement from the newspapers. The Barklys could do nothing to help the Heligolanders, who became Germans whether they liked it or not. Still in acute financial straits, the Barklys returned to Britain, where he died on a visit to his wife's brother's estate at Stapleford Park, Pontefract, on 27 September 1890, aged only 47. His early death was attributed by his family to 'a broken heart' but his death certificate gives the cause of death as 'coma diabetes'. His death was a severe blow to Sir Henry Barkly, all of whose four sons predeceased him. 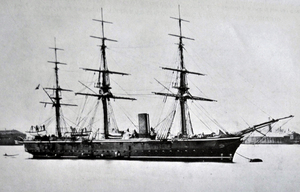 His widow Fanny wrote two books of reminiscences at Hampton Court Palace, where she was granted a 'grace and favour' apartment in 1892 thanks to the personal intervention of Queen Victoria. She resigned her apartment in March 1900 - the other Palace occupants found her and her five children too lively.