Royal Marine, yachtsman and author was born at Hawick, in the Scottish Borders, on 18 January 1942, the son of Norman Hastings Tailyour (later General Sir Norman) and his wife, Priscilla June (née Southby). Southby-Tailyour hyphenated his name on his mother’s death in 1971. 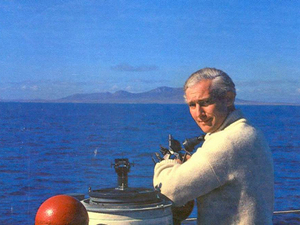 He was educated at Stubbington House and the Nautical College Pangbourne before attending, briefly, Grenoble University in the French Alps. Southby-Tailyour’s father, also a yachtsman and career Royal Marines officer, travelled extensively with his family until his final promotion as the Commandant General of the Royal Marines.

Southby-Tailyour was brought up with sailing craft from birth: his father owned a gaff-cutter and an ex-Royal Navy 112 ft motor launch. His Godfather and guardian (also a Royal Marines officer) owned a 35-ton Bristol Channel pilot cutter which Southby-Tailyour regarded as his most permanent ‘home’ until 1960 when he was commissioned into the Royal Marines. 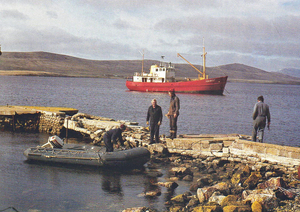 Most of his service was to be spent at sea or in commandos. In 1963 he was attached to the Hubert Commando of the French Commandos Marine and attended their 'combat swimmer' course before serving in a submarine and with the Foreign Legion.

Between 1966 and 1968 Southby-Tailour was seconded to the Sultan of Muscat and Oman's Northern Frontier Regiment and was awarded the Sultan's Bravery Medal for operations during the Dhofar War.

On return from the Middle East Southby-Tailyour married Patricia Anne de Gascoigne Ker who, with their two children, Hamish Patrick (b.1973) and Hermione Veryan Elizabeth (b.1976) would later accompany him to the Falkland Islands 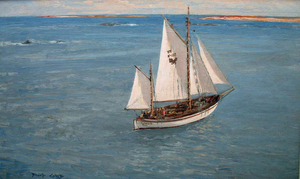 In 1977 Southby-Tailyour was appointed as acting major to command Naval Party 8901 in the Falkland Islands from 1978 to 1979.The Commander-in-Chief in England ordered him not to take his wife but the then governor, James PARKER, stated that, as Commander-in-Chief in the Islands, he would welcome the family. They moved into 26 Ross Road West in Stanley. Unfortunately, this relationship faltered when Parker demanded that Patricia ‘spy on his behalf’ on the local social societies.  Southby-Tailyour refused and as a result the Governor prohibited the family from mixing socially with the members of all government departments: an impossible order to obey. Nevertheless, Patricia did play her part in the community and within NP 8901 where she quickly became a shoulder to lean on for the younger marines. She went on to become Plymouth’s longest serving magistrate and a Deputy Lieutenant for Devon.

Before leaving the United Kingdom, Southby-Tailyour had been briefed by the Ministry of Defence (MOD) and the Foreign and Commonwealth Office (FCO) to re-write the ‘Concept of Operations’ for the defence of the Falkland Islands with a view to actively preventing an invasion.  Hitherto the marines had been required to hide in ‘camp’ while unrealistically exercising a form of guerrilla warfare.

As Patricia settled into Stanley life, and the children into the local schools, Southby-Tailyour began his year-long assessment. His brief included identifying a beach across which a special forces party could land for intelligence purposes prior to a British task force being despatched following an Argentine invasion.

Conveniently, as a yachtsman and amphibious specialist, this tied in with Southby-Tailyour’s passions and allowed him to study as many of the archipelago’s landing sites as was possible in the time: his report on the one ‘military’ beach (Campa Menta Bay) being hidden among his more personal researches. In this his close relationship with Jack SOLLIS, the master of MV Forrest, was crucial. Although he made all his own observations in a 120 page A4 notebook, with over 2,000 photographs and many watercolour sketches, little was recorded that did not come from Sollis himself. 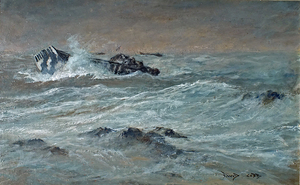 Southby-Tailyour’s first voyage in MV Forrest was made on 19 April, 1978 and was from Port Stanley to Bluff Cove. The last journey was made on 26 February 1979 from Saunders Island to the Jasons, thence returning to Stanley. In between these voyages the only settlement which he did not visit was Sea Lion Island.

He also claims to have made the first (and possibly the only) landing from the sea on the Eddystone Rock on 28 April 1978.  These patrols aimed to show a military presence around the Islands while taking and returning Royal Marines from training sessions with the Settlement Volunteers. MV Forrest also carried small parcels and stores to the settlements although it was essential that ‘trade’ was not taken from the Falkland Islands Company’s MV Monsunen. His second visit to Goose Green was as navigator in the Norwegian yacht Capricornus. 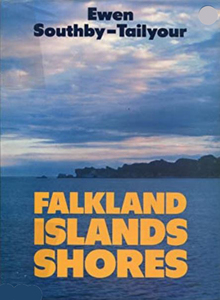 Awkwardly, the Governor was being briefed by a different department in the FCO and believed that any Argentine invasion force should be met with ‘a cup of tea’ - on the understanding that once the inevitable had happened it could not, or would not, be undone. This  contradiction in instructions did not help their already fragile relationship as Southby-Tailyour knew that the  task of defending Stanley – and particularly Government House – with just  40 Royal Marines and no defensive weapons was an impossibility, yet one that had to be practiced despite HE’s active hindrance.

Equally implausible was the FCO brief that he had to ‘buy three weeks bargaining time in the United Nations!’ This clash came to a head when Governor Parker sent a formal report to the Commander-in-Chief Fleet complaining of Southby-Tailyour’s ‘military behaviour’.  Happily, the C-in-C replied confirming the major’s orders, thus allowing him to continue with the training and reconnaissance, but now less encumbered by unrealistic counter-orders from Government House: 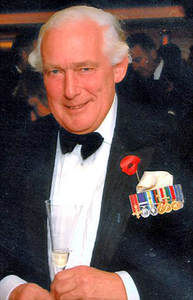 Southby-Tailyour’s ‘Concept of Operations’ was approved at Cabinet Level. Throughout his military career, and particularly when in the Falkland Islands, Southby-Tailyour supplied overseas beach intelligence to the Ministry of Defence.  On their return to the United Kingdom Patricia was debriefed by a new C-in-C on the social aspects of living in Stanley, in expectation of NP 8901 becoming an accompanied posting.

Southby-Tailyour was next appointed to command the Landing Craft Branch of the Royal Marines and it was during this time that Argentina invaded the Falkland Islands.

On 2 April 1982 he reported to Headquarters Commando Forces in Plymouth where he was appointed the navigational and amphibious adviser to the Task Force commanders: eventually he took command of the combined, landing craft assault squadrons. Having been closely involved in the planning for the re-taking of the Islands - and personally briefing every man in the Task Force and most ships’ captains - he led the first two waves onto the San Carlos beaches on 21 May and, subsequently, the landing of the Scots Guards at Bluff Cove. 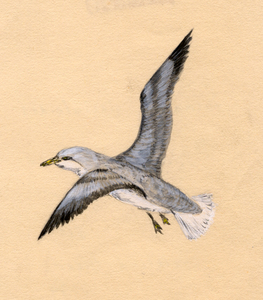 In the subsequent honours list he was appointed OBE for his unique part in the success of the campaign.

In 1993 Southby-Tailyour published his version of these events in his second (of 16) books, Reasons in Writing.  Earlier he had published his navigational notes in Falkland Islands Shores and was elected the 1982 British Yachtsman of the Year for this survey work.

Southby-Tailyour retired from the Royal Marines as a lieutenant-colonel in 1992 to further his writing and sailing careers while establishing Ewen Southby-Tailyour Associates which offered specialist amphibious advice to shipbuilders and foreign governments.

In 1993 he joined the FCO for monitoring duties in the Former Republic of Yugoslavia when he was also requested by the intelligence services to undertake ‘surveillance tasks’. However, he resigned following a demand from his Greek superior officer that he falsify his daily reports in order to hide breaches of the arms embargo imposed under UNSC Resolution 713.

Throughout his life sailing has predominated and particularly high latitude exploring under sail for which he has received numerous awards.  For five summers his third yacht, Black Velvet, was chartered by the Devon Wildlife Trust’s ornithologists to search for rare seabirds in the Western Approaches.

In 2006 he ‘invented’, and continues to organise, the Jester Challenge; an annual, oceanic, single-handed event for yachts under 30 feet and in 2014 was awarded the Jester Medal for ‘services to single-handed sailing’.

In 2019 he was sworn as a Younger Brother of Trinity House in recognition of his life-long, nautical accomplishments.

Ewen Southby-Tailyour and Patricia, plus numerous dogs, live in great contentment in a 430-year old farmhouse in South Devon, while his fourth Black Velvet lies on a river mooring just a 20 minutes drive (and row) away.

Reasons in Writing: a Commando’s View of the Falkland’s War; Leo Cooper, 1993

The Next Moon; a Special Operations Executive agent in France; Penguin/Viking, 2004

And in the following books of reference: