character, was born at Leicester Creek on West Falkland on 1 December 1889, the eldest girl and sixth of twelve children born to George McKay and Barbara Gidina, née Rutherford.

Her parents came to the Falklands from Brora on the northeast coast of Scotland, having eloped together because Barbara's parents disapproved of George. The first of their children was born in 1883 and the last in 1901; all survived.

Lottie's father was an 'outside shepherd', living and working at a distance from the main settlement, Fox Bay West. Lottie grew up as a Camp child in great freedom, learning to live a very self-sufficient life, which included milking cows for the family. Undoubtedly she would also have helped with her younger brothers and sisters as they came along.

When she was old enough she went to work at Roy Cove for WW BERTRANDS' family (and for the Clements). Coincidentally she and her future husband Jack (from the Isle of Skye) started work on the same day, she as a maid and he as a shepherd. Her parents emigrated to Australia in the early 1900s, taking the four youngest children with them and she did not see any of them again. 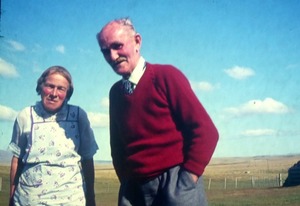 Jack McAskill and Lottie McKay were married at Mount Sulivan House, an outside shepherd's house north of Fox Bay West on 10 May, 1911. The assistant cathedral chaplain, J Meredith Bate officiated at the wedding, and the witnesses were three of Lottie's brothers, Richard, Donald and Gideon McKay. Sulivan House was within easy riding distance of Goring House, Chartres, where Jack and Lottie made their home.

She was a marvellous housekeeper, the house always smelling of freshly scrubbed benches and polish which she used to make herself. She milked her cows every day, setting the milk in big white basins, and skimming the cream to make butter. A small, energetic and outspoken woman, she was endlessly hospitable. 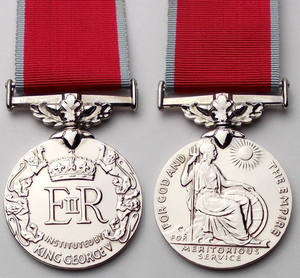 A much deserved reward

She was an excellent horsewoman who always rode side-saddle, and took part in the horse races that were part of the annual West Falkland Sports week.

She had no children of her own, but the family of her brother Dave living not far away at Teal River were much loved.

In 1918 a radio station came to Fox Bay, bringing an enormous benefit by linking West to East Falkland. At Fox Bay was the government establishment: the stipendiary magistrate who was also postmaster and collector of customs lived here; so did the doctor. Chartres was the first station to put a telephone line through to Fox Bay, and very soon others followed suit. This revolutionised communications, and also meant one could phone the doctor, instead of riding for many hours to call him, often only to find that he had been called away elsewhere.

This was where Lottie, or Mrs Mac as she was increasingly known, came in. The single wire party lines stretched for many miles and no less than four lines met at Goring House. On each of the lines there were a number of telephones and each phone reduced the strength of the current, so a small switchboard was installed. Mrs Mac became unofficial telephone operator, assisting people at all hours of the day, and of the night if a medical emergency arose.

It must have been such a burden at times, and yet she was never heard to complain and her service to the West Falkland community was recognised in 1961 with the award of the British Empire Medal. Governor ARROWSMITH travelled to Chartres and thence to Goring House to present her with the medal; she not considering it necessary to travel to Stanley! Indeed she seems only to have visited Stanley twice in her sixty years at Chartres, both for reasons of illness.

Goring House was on the main north/south track of West Falkland, and everyone who passed called in for 'smoko'. Innumerable cups of tea and homemade cakes were consumed under the McAskills' roof in all those years. In the old days it was a welcome break for horses and riders, and later with the advent of motor bikes and Landrovers the custom continued. Indeed if one passed without calling in, there would be a question as to why next time one phoned through.

She and Jack celebrated their 50th wedding anniversary in 1961, but Jack McAskill died in 1968. Mrs Mac continued to live at Goring House, looking after the young single shepherds who were now responsible for the flocks which Jack had looked after for so many years.

In 1973 she moved to Stanley, taking with her her two favourite cows and her old dog. She and her sister-in-law Rosie, widow of her brother Dave, lived together in a bungalow on Davis Street, and she could be seen regularly setting off to milk her cows or taking them to new grass.

Mrs Mac died in 1979, and with her passed a legend of hospitality and service to the community.